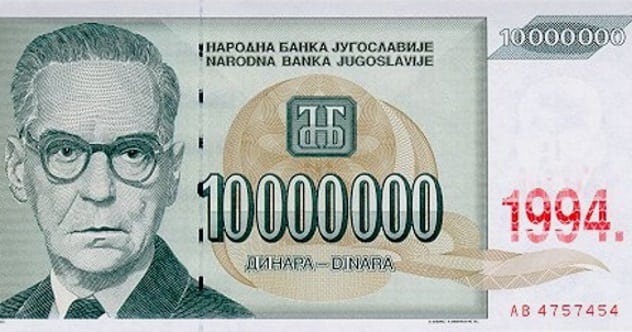 
Venezuela recently introduced a new currency to replace its already battered money.[1] For some years now, the nation has been experiencing serious hyperinflation that has totally rubbished the value of its currency, the bolivar. The government introduced the new currency, the sovereign bolivar, hoping it will curb the effects of the inflation.

Judging from what you will find out from this list, this is unlikely. The sovereign bolivar is just the removal of five zeros from the old bolivar, and it will most likely go the route of its predecessor if the economic factors responsible for the inflation are not addressed. That said, Venezuela is hardly the only country to have suffered hyperinflation. Several other governments, including ancient Rome, have suffered even more disastrous cases of inflation and hyperinflation.

The Yugoslav dinar suffered an inflation of five quadrillion percent (five with 15 zeros) between October 1993 and January 1995. Years before the inflation, the cash-strapped Yugoslavia had been printing more money to maintain its budget. The government was also borrowing money from its citizens. The government did not beg citizens for their money outright. Rather, it made it difficult for them to make withdrawals from government banks.

As the inflation worsened, the government responded by fixing prices and running businesses that sold below the fixed prices. The government-owned businesses failed, while the private businesses could not sell at the fixed prices. Citizens could not afford to fuel their cars and opted for public buses. The Belgrade Transit Authority (GSP) could not fuel its buses, either. The limited buses in service were so crowded that ticket collectors could not collect fares, causing the cash-strapped agency to lose more money.

The fact that serious inflation has been fingered as one of the causes of Rome’s collapse is enough evidence that inflation is not a modern phenomena. The inflation started around AD 200, when the Antonine Plague wiped out a huge chunk of the Roman population, leading to scarcity of workers and rapid increase in wages. This, in turn, led to an increase in the price of goods.

At the same time, the Roman military was rapidly expanding, and Rome was investing money to build infrastructure in its new territories. The government decided to debase its silver coins by mixing them with impurities. This allowed it to mint more coins it normally should have. Citizens later discovered the silver coins were not pure and increased the prices of their goods to cover for the loss.

Debasing continued with the change of emperors, worsening the inflation. Between 200 and 300, Roman coins inflated at 15,000 percent. At one point, the inflation was so severe that Emperor Diocletian (284–306) responded by fixing prices, which only succeeded in sending merchants to the black market.

Other emperors continued with the price fixing, sending more merchants into the black market. At the time of the empire’s collapse, the inflation was so severe that the government could not pay the army, even though taxes were at a record high. The rebellious army turned against the empire, leading to its collapse.[3]

Between 1919 and 1923, Germany faced the worst hyperinflation in history. Its currency, the Papiermark, lost so much value that workers rushed to markets to buy the items they needed immediately after they received their pay. The government itself did not even bother adding anti-counterfeiting measures to its new super-high denominated notes since the cost of counterfeiting exceeded their face value.

At the height of the inflation, Germans dealt with so many zeros that they started suffering from a unique mental disorder called zero stroke. They dreamed of zeroes and counted everything, including their ages and children, in zeros. It was normal for someone to say he had three million children or that he was 40 billion years old.

The 13 colonies that would later form the United States introduced the Continental to fund the Revolutionary War against Britain. The money was backed by nothing other than the promise to pay. This caused inflation, since many citizens were not confident in the government’s ability to repay. The inflation was so terrible that American citizens preferred selling supplies to the British, who paid in gold and silver, than to Congress, who paid with what they considered worthless money.

The effects of the inflation were worsened by the British government, which had taken to printing counterfeit Continentals and sending them into the colonies. The colonies-issued Continentals were of exceptionally low quality. The signatures and serial numbers were handwritten, and the currency had little or no anti-counterfeiting measures. The British counterfeits were more original than the colonies-issued Continentals. Most of the time, people recognized the fake because it was exceptionally better than the original.

The British sometimes gave the counterfeits to captured or deserted American soldiers before sending them back into areas controlled by the colonies. The British also took out adverts in newspapers, requesting for people interested in taking counterfeit notes into the colonies. Meanwhile, Congress continued printing more money to fund the war. The inflation was so severe that it left many deep in debt long after the war was over. The debts later led to Shay’s Rebellion and the creation of the US Constitution.[5]

Hungary has experienced two terrible instances of inflation in its history. The first followed the breakup of the Austro-Hungarian Empire after World War I, while the other started toward the end of World War II. Following World War I, the new government started printing money to finance its budget. The ensuing inflation ended with the country abandoning the kronen (aka korona) for the pengo in 1926.

A second inflation started in 1944, when most of Hungary’s infrastructure was destroyed by Germany and Russia. Russia also made Hungary pay reparations. The cash-strapped Hungary responded by printing more money. Hungary printed so much money that inflation rose 150,000 percent a day.

The government even introduced the milpengo (one million pengos) and the bilpengo (one billion pengos) notes to handle the excess zeros, but they were almost useless, since they, too, quickly gathered zeros. By July 1946, a US dollar was worth 460 trillion trillion pengos, versus five pengos in 1941. On August 1, 1946, the government abandoned the pengo altogether and replaced it with the forint.[6]

Zimbabwe’s hyperinflation in 2008 is the one of the worst ever recorded. At its height, prices of goods doubled every day, and unemployment was at a world record of 80 percent. Money lost value so much that the government introduced the Z$100 trillion note.

In the 1990s, President Robert Mugabe seized lands from experienced white farmers and redistributed them to inexperienced black farmers. This led to a loss of production, causing farms and later factories to default on their loans and shut down. The government itself was in debt and in need of more money. With the economy in a downturn and with no viable source of income, the government responded by printing more money.

Excess money in circulation, failed debts, closed factories, unemployment, and low exports are the perfect recipe for inflation. Instead of tackling the root problem, the government responded to the inflation by printing more money and fixing the prices of goods, which only worsened the situation. The cost of producing goods increased so fast that companies were selling their products at a loss.

Inflation rose steadily, reaching 1,281.1 percent in 2006, 66,212.3 percent in 2007, 2.3 million percent in July 2008, and a record high of 79.6 billion percent in July 2009. By this time, basic necessities like bread were sold for billions. Merchants even refused to accept Zimbabwean notes, opting for currencies like the US dollar. The government itself soon caught on the fad and abandoned its own dollars for the US dollar, which remains the official currency of the country to this day.[7]

Austria became independent again following the breakup of the Austro-Hungarian Empire. Its neighbors, Czechoslovakia and Yugoslavia, which were also part of the empire, imposed anti-trade policies on it soon after its creation. Inside Austria, different regions also introduced anti-trade policies against other regions.

Austria soon went to war against Czechoslovakia and Yugoslavia over its borders. Austria’s government started printing money to finance the war, increasing the notes in circulation by 14,250 percent between 1919 and 1923. Inflation followed. In 1919, a US dollar was worth 16.1 crowns. By 1923, it was worth 70,800 crowns.

Government presses worked at full capacity throughout the inflation, churning out new notes day and night, even though most industries had shut down. The inflation came to an end in the late 1922 and early 1923, when the League of Nations gave Austria a loan. The crown itself was replaced with the schilling. Austria never fully recovered from the inflation before it was occupied by Germany during World War II.[8]

The Greek inflation of 1941 to 1944 was the result of the German and Italian occupation of the nation during World War II. The Greek drachma started depreciating when Germany attacked in April 1941. Traders, fearing a defeat and occupation by Germany, started hoarding goods. The ones who sold demanded payment in gold. Their fears became true when Germany won and occupied Greece, leading to further depreciation of the drachma.

Before the inflation, individual banks were responsible for issuing their own money. In 1927, the Chinese Nationalist Party came into power and started funding its budget by borrowing money from these banks. The banks later refused to loan the government more money over fears it could not repay. The government responded by creating the Central Bank of China to issue bonds to the banks in exchange for money.

In 1931, the bonds lost half of their value after Japan annexed Manchuria. When the banks refused to buy more bonds, the government passed a law demanding that banks buy bonds with 25 percent of their deposits. The banks still refused to buy the bonds. The Bank of China even sold the bonds in its possession at a loss. This culminated in the government takeover of the Bank of China and the Bank of Communications, which were the two biggest banks at that time, and every other bank thereafter.

More problems followed for China when the US Treasury started buying silver. A huge chunk of China’s silver was smuggled out of China and sold to the US, leading to a fall in the yuan. This culminated with the government taking China off the silver standard in 1935. With the country off the silver standard and the government in total control of the banks, the government started printing money. It printed so much money that its presses could not keep up, and some printing was contracted to England.

The severe hyperinflation was the reason Chairman Mao Tse-tung of the Chinese Communist Party won lots of supporters during the Chinese Civil War. The war ended with the Nationalists fleeing to Taiwan, while the Communists took control of the country. The Communists replaced the old yuan with the new yuan at the rate of three million to one.[10]

Poland became independent again in 1918 and was still unstable when it went to war with Russia. With no other viable source of income, the government started printing money to finance the war. The government printed so much money that its currency became unstable and crashed in 1923. At the end of May 31, 1923, a dollar was worth 52,875 Polish marks. By the end of December, it was worth 6.4 million marks, and on January 10, 1924, it was worth 10.3 million marks.

Industries shut down, as most people could not afford their goods. The few that did not shut down reduced the number of times a worker could come to work in a week.[11] At the height of the inflation, the government issued a 50-million-mark note. The 100-million-mark note was planned but not issued.