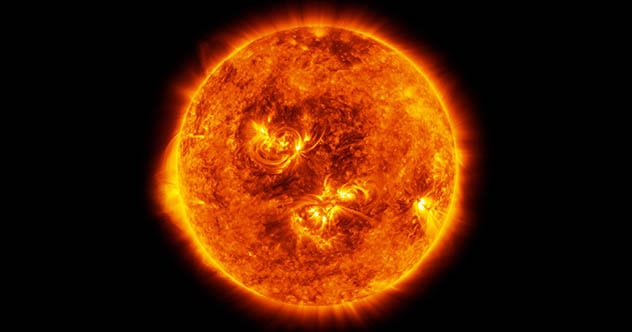 
The definition of ‘mysterious’ has changed drastically over the centuries. What may have been a baffling secret of nature in, say, the 13th century would be common knowledge by now, as our understanding of the world has got a lot better, thanks to steady advancements in science and technology. That’s not to say that mysteries don’t exist anymore. There’d always be something our current set of knowledge can’t explain. In fact, it’s essential to have things we’re yet to figure out to grow and progress as a society.

Some mysteries, however, aren’t just persistent, but seem to get even more confusing the more we look into them. From the mysteriously-diverse wildlife under Antarctica to how exactly the Sun works, here are ten unresolved mysteries that got even more baffling the last time we checked up on them.

See Also: Top 10 Mysteries And Crimes Solved By The Internet

8 We Still Don’t Entirely Get The Sun

If you think about it, the Sun must have been the most mysterious thing in the world for an early man. Here you are, barely making sense of the world around you full of various types of life, diverse landscapes and weird weather patterns. Absolutely nothing, however, compares to the giant ball of fire hanging in the sky that rises from one side of the horizon every day and sets into the other. Is it controlled by a higher entity? Will they switch it off some day? These are the questions our ancestors would have been faced with without anyone to answer them.

Of course, our understanding of the Sun has improved quite a bit from those times. Thanks to modern science, we now know that the heat of the Sun doesn’t come from fire, but rather complex nuclear fusion reactions in its core. That said, the Sun still holds many mysteries we may never know the answer to, as it’s impossible to actually go there and take readings.

That doesn’t mean that we can’t raise the bar for how close we can go and get better observations, which is exactly what the team behind the Parker Solar Probe believed. The probe has been the closest we have ever got to the Sun, though instead of answering questions, the mission raised entirely new ones.

Their observations suggest that things on the Sun are actually much, much more chaotic than we had previously thought. For one, the probe found that the Sun’s surface is regularly hit by sweeping magnetic waves so powerful that they temporarily reverse the local magnetic field. More importantly, they found that the waves and solar winds on the Sun travel at least twenty times faster than any standard model of the sun we have.

If we could account for that discrepancy and understand exactly what’s going on there, we’d be in a much better place to safeguard ourselves from harmful solar waves that could someday kill all electricity on Earth.[1]

7 Life Under Antarctica Is Surprisingly Diverse

When we first started scientifically researching and documenting all the species on Earth, we were working under the assumption that life would be more diverse in the more hospitable regions of the world. We were working under the assumption that ‘hospitable’ means the same thing for all—or at least most organisms, though as we gradually found out, that’s not the case. Life is actually much more diverse and thriving in some of the most extreme regions of the world, and we still don’t understand how.

One of those regions is Antarctica, which also happens to be the only continent that’s not permanently inhabited. We’re not really talking about the surface, though, but the sea under the almost-perennially frozen cover of ice.

Mind you, it’s one of the most extreme places in the world, so much so that you need to spend an hour to dress up for a dive. Diver equipment here is about 200 pounds heavy, as you’d die within ten minutes if you attempt to dive with regular diving gear. It’s a fair assumption that it’s not conducive to any sort of life. As one photographer on a National Geographic expedition found out, though, that’s really not the case.

While we always knew that the waters underneath Antarctica hold their own secrets, no one thought of it as a vibrant ecosystem for plant and animal life. It was when the photographer made his way down to the floor that he realized the sheer diversity and number of organisms that call this hellhole home. From sea spiders to corals to sea stars, Antarctica’s deep sea is surprisingly teeming with life, though we don’t understand how. The photographer was so mesmerized by the prolific life on the ocean floor that he called it a ‘luxuriant garden’.

Again, this place is so hostile that he had to deal with nerve damage for seven months after the expedition.[2]

6 Interstellar Space Is A LOT Weirder Than We Expected

It’s no breaking news that the universe beyond the tiny little planet we call home is a mysterious place. While we’re definitely closer to solving some of those mysteries than we were, say, a hundred years ago, that’s still not close enough. There are still many things we don’t understand about what all is out there, made worse by the fact that every time we have a new technology to get us closer to the answers, it actually ends up posing even more questions than before.

Take the Voyager 2, which – along with the Voyager 1 – is the only time we have been able to send a piece of our tech to interstellar space. One of its main aims was understanding what happens beyond the boundary of what we know as the heliosphere – the range of the Sun’s magnetic field that protects us from all kinds of radiation.

What we found there, however, doesn’t align with our calculations at all. For one, the magnetic field beyond the heliosphere is about two to three times stronger than we expected. That means that the interstellar particles exert an electromagnetic pressure of over ten time than we previously thought, which is pretty baffling for scientists who need those figures to be accurate to better understand the universe. They also found a lot of leakages in the space that marks the boundary between the heliosphere and interstellar space.[3]

All throughout history, the question of exactly where we came from has been on everyone’s mind. For some, it’s a philosophical question, but for the scientists, it’s a literal one. How did human life, and life in general, physically start on Earth is still largely a mystery, even if we have made tremendous strides in that field recently. We now know a lot about early life on Earth, thanks to better excavation and analysis techniques.

While we have answered many questions about the origins of life on Earth, research teams keep finding stuff that simply refutes everything we think we knew. As an example, consider the various alien-like species they have found – and still keep finding—in the Canadian Rockies, particularly from the Cambrian period. Many of the species couldn’t be classified according to any of our evolutionary models, making us rethink the whole thing every now and then.[4]

4 We Don’t Know Anything About The Oldest Animals

While on the one hand we’re finding completely unknown species, we’re still no closer to finding the beginning of the tree of life Earth as we see it on the other. While it’s true that our ability to look into the past has vastly improved in the recent years – especially in the fields of archaeology and excavation—dial the proverbial knob of history too far back, and you’d start entering entire eras that are in the dark.

Moreover, we keep finding things that challenge our previously held models of our lineage. Research has found that the animals before the Cambrian period were entirely distinct from anything that came after, and we don’t understand how. The complex traits we see in animals today – no matter how immensely varied we all are – are actually a result of an event called the Cambrian Explosion, though the animals and plants that existed before are a complete mystery to us.[5]

3 The Evolution Of Turtles Is (Still) A Mystery

Turtles occupy an interesting place on the family tree. It’s an animal that has successfully freed itself from the laborious-yet-crucial role of getting a house, simply by being born with one on its back. If you think that it’s not easy to trace its evolutionary roots, you’d be right. Scientists have never had much idea about where turtles really come from, though our basic understanding of them has certainly come a long way in recent times.

That understanding, though, was challenged by the recent discovery of a turtle-like animal some 220 million years ago. According to scientists, the animal that should have been at that place in the family tree of the turtle should have had a beak and a pair of two holes in its back, just like turtles. If we cross checked it with other fossils found around that time, we’d find that they don’t align with this discovery, either.[6]

2Saturn Gets More Mysterious Every Time We Check Up On It

For all the discussion about colonizing outer space, we forget that unimaginably vast parts of the solar system – let alone the galaxy and beyond – are quite boring to begin with. While we’re sure it’d be fun to visit alien worlds at first, that excitement would wear off quite soon and we’d find that there’s not much to do in space.
Saturn, on the other hand, defies all norms of how boring space should be. Every time we make a visit to Saturn or one of its many moons, we find something completely different we don’t understand.

Take its rings, which keep getting more mysterious the more we try to understand them. We know that they’re made up of ice and rock and always have moving, outward ripples due to the gravity of Saturn’s 62 moons. As some recent findings suggest, though, they also have waves that move inward, which is confusing for the scientists. They don’t know what’s causing them, though it’d be clearer in future expeditions. There’s also the fact that its outer ring is much bigger than previously thought, as a recent study found.[7]

If you haven’t, we’d highly recommend reading the story of how we first discovered that the universe is expanding. While too long for the scope of this list, the discovery – for the first time in human history – proved that everything, everywhere is always in motion, which is sort of poetic, too. It still posed many more questions, like the rate of its expansion, whether it’d keep doing it indefinitely, and what does it mean for us.

As per recent research, though, we’re not just no closer to finding the answers, we also keep finding things that completely throw us off the path. If some recent observations are correct – and there’s no reason to believe they aren’t; they’re scientists after all – calculations of the rate of expansion of the universe keep turning different values depending on how we measure them. If you calculate it by studying the afterglow of the Big Bang, it’s a completely different value from calculating it from the cosmic microwave background.

It defies the fundamental rule of math and universe, that the correct answer to a problem would be the same regardless of the method you use to find it. According to some, it may need an entire new type of science to account for the discrepancy, as the true rate of expansion can only be one value if we go by our current rules of math and science.[8]

Himanshu has written for sites like Cracked, Screen Rant, The Gamer and Forbes. He could be found shouting obscenities at strangers on Twitter, or trying his hand at amateur art on Instagram.